The Beast – Hard as Nails

The Beast – Hard as Nails

It isn’t every day that a limousine is kitted out with more protection than a tank but in this day and age with security threats a daily occurrence it is a necessity. The Beast is one of these heavily armoured vehicles. Just the words ‘The Beast’ draw up images of a blood thirsty wild animal that cannot be tamed, peering through the night looking for its next victim, however, rather than capture its prey The Beast protects. Fitted with enough armoured kit to happily sustain most terrorist threats The Beast is the car of choice for none other than the President himself. Now if for a second you were thinking that perhaps you may need one of these in your life, think again. The Cadillac One is rumoured to have cost a whopping $1.5million. So here we have 6 things that you may not have known about the Presidents car.

She is not a lightweight

The Beast is one big mamma. Weighing in at approximately 20,000lb, the equivalent of 60,000 tins of baked beans, she is weighty to say the least but when you are carrying around enough armour to ward of an IED explosion it is no wonder. Her doors alone weigh the same as those on a 757 aeroplane and her windows are 5” thick. It’s the accessories that make her heavy. Just as an added piece of information, this excuse does not work when weighing in humans, I’ve tried and failed.

She isn’t who she says she is 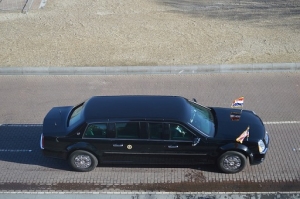 The Beast is also referred to as The Cadillac One, however, she is far from a Cadillac. Her chassis, transmission and diesel engine are actually based on a Chevrolet Kodiak, a commercial truck which is usually more at home at hauling heavy goods around the country. Her predecessors were all Cadillac’s but apart from a little piece of design work on her exterior and her headlights, nothing else in there is Cadillac. Ah and her badge, she shares that with over 3million other Cadillac’s in America.

Just like the President himself The Beast will never travel alone. Whenever she is travelling she has her own mechanic and her specially trained Secret Service pilot on board. Her driver is highly skilled in defensive driving, able to perform J turns and can perform evasive techniques at the drop of a hat. Now we would just love to see all 18ft of her doing a J turn in a busy parking lot. Can you imagine the carnage?

She has an issue with manoeuvrability

We have established she is no ballerina but the irony of The Cadillac One and her seriously armoured body is that she quite famously got stuck in Dublin of all places. Yes she can deflect bullets, can withstand an IED but she is not the most agile creature in the world having got stuck on a raised kerb in 2011. I could drop some jokes about her large bottom and weight issue but with her ability to stop all but an atomic bomb I’m not sure they would be justifiable. 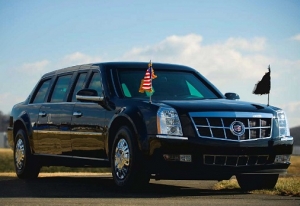 So elephants are not renowned for being the fastest animals on the planet but neither is The Presidential car. With a top speed of just 60MPH she isn’t going to be winning any land speed records but when you have access to your own super-duper shiny plane who needs to travel quickly across land? Unfortunately averaging just 8MPG she is also not the most economical vehicle on the planet but when you are carrying around 60,000 cans of baked beans who would be?

The Beast has its own blood store and armoury

She is well equipped for almost any event. She is a fire-fighter, an emergency room and security all rolled into one. It is quite common knowledge that she holds a tank of the Presidents blood type in the trunk in case of dire emergencies but it isn’t so much widely known that she also holds shotguns, has special seals around the doors to prevent contamination of bio-chemicals and has tear gas canisters installed. She is also rumoured to carry grenade launchers, although this information has never been confirmed. There are 2 things we can bring from this 1) Do not mess with her 2) She’s potentially downright dangerous. So here we have it. The Beast, The Cadillac One or Limo One. She is as hard as nails and just like her funky nickname, approach at your own peril.